No Result
View All Result

The fans (most of them wearing brown and orange) were delighted to see members of their beloved Browns take the field.

EASTLAKE, Ohio — It’s become one of the biggest parties in Northeast Ohio, and this year’s edition may have been the best yet.

Browns wide receiver Jarvis Landry hosted his annual celebrity softball game Saturday at Eastlake’s Classic Park. It marked a return for the event following a one-year hiatus caused by the COVID-19 pandemic, and 7,000 fans (most of them wearing brown and orange) crammed into the stadium to get in on the fun.

From one generation to another: @tkelce chats with @BernieKosarQB, whose jersey he once wore as a Halloween costume 🏈 @wkyc pic.twitter.com/KUDRHTjEX9

Before the game itself, some of the players took part in a special home run derby. Landry and Mayfield were among the finalists, with Mayfield ending up as co-champion with Landry’s agent, Damarius Bilbo.

.@God_Son80 hit these 2 💣💣 to advance to the second round 🙌🏻 @wkyc pic.twitter.com/xPRBlFlGgG

Unfortunately, Beckham didn’t do nearly as well, but at least he didn’t reinjure his recently repaired knee.

OBJ did not have a stellar HR derby… @wkyc pic.twitter.com/oIAaqhrWgv

In the game itself, it was Myles Garrett’s turn to shine, as the All-Pro defender belted a homer to aid Landry’s team in a 22-7 rout. Garrett’s trot around the bases was also legendary, but still no word on if he plans to pursue a baseball career.

Check out some photos from a fun day in Lake County! 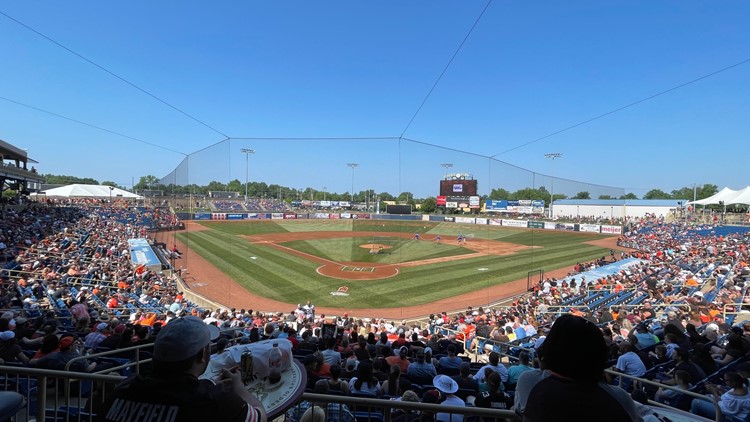 Tom Withers of the Associated Press contributed to this report

‘All this money and they are not happy. I don’t hear them laughing’ – Louis Walsh on the darker side of fame

Kenya Moore Is Glowing In Her Latest Photo

WHERE ARE THEY NOW?

It’s Not ‘Right Time’ to Have Baby

Gillian Anderson On ‘The Crown’, Margaret Thatcher & Her Career – Deadline

No Result
View All Result